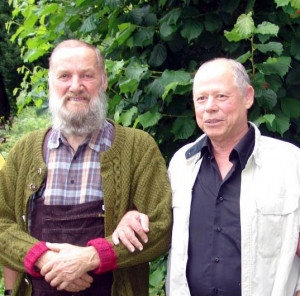 @IPF Photo: Left Prof. Eshel Ben-Jacob († 2015) while on a visit with Johann Grander († 2012) in Jochberg, Tyrol
We have known for many years that water takes on information, stores it and passes it on to the environment and its surroundings.  Water reacts to all kinds of signals such as bio-signals originating from nature or technological signals such as electromagnetic waves from transmission technology.  Both kinds of signals are received as information, stored and then passed on.

By means of special examination methods the effect of different information on water can be proven and even made visible.  In order to prove this 2 Petri dishes (flat, round, transparent dishes, which are used in examinations in laboratories) are filled with a gel-like food substance, that serves as a food source for bacteria.

Then bacteria from a selected breed are injected into the middle of the Petri dish.  The bacteria begin to multiply and form varying patterns:  sometimes being broadly fanned out and other times small and consisting of straight lines.  In the test arrangement all parameters remain the same in each repetition - except for the information content of the water, that is required for the production of the food substance.

The described experiment with both Petri dishes was developed by the physicist Prof. Eshel Ben-Jacob from Israel.  The photos were taken in 1998 and document the effects when water with varying information content is used for the production of the food substance.

In the experiments, which were photographed by Eshel Ben-Jacob,

•the food substance 1 was produced with untreated water and

•the food substance 2 was produced with water, that had been subjected to an electromagnetic signal for a determined amount of time.

With this experiment Prof. Ben-Jacob was able to answer more questions regarding information characteristics of water and could make the following conclusions:

Can information in water be recorded with physical measuring instruments?

To date there has not been any physical procedure published that fulfills the requirements.

Even the "finest" physical measuring instruments are several tenths of a percent inaccurate to directly record characteristics like information or structure of water.

Therefore, the method of proof used by Prof. Ben-Jacob takes on even more significance.  As a physicist and former President of Israel's Physical Society he managed a scientifically brilliant achievement.

Ben-Jacob transferred the task of measurement from physical measuring instruments to living organisms (bacteria).  He says that bacteria reacts at least 1000 times more sensitively than any measuring device known today.

His photos, which strike one as art, speak a very clear language.

How and where the information storage in water could take place still remains to be answered.

It all comes back to the knowledge of Johann Grander, who was always convinced of the importance and sensitivity of animals.  He showed that even bees are very good "biological measuring instruments".  In one experiment he proved that bees are capable of distinguishing between revitalized and non-revitalized water.  The rate of accuracy was around 95%.

>> Professor Eshel Ben-Jacob passed away unexpectedly on July 5th, 2015 - may he rest in peace!

By clicking the button "Subscribe now" you agree to our .